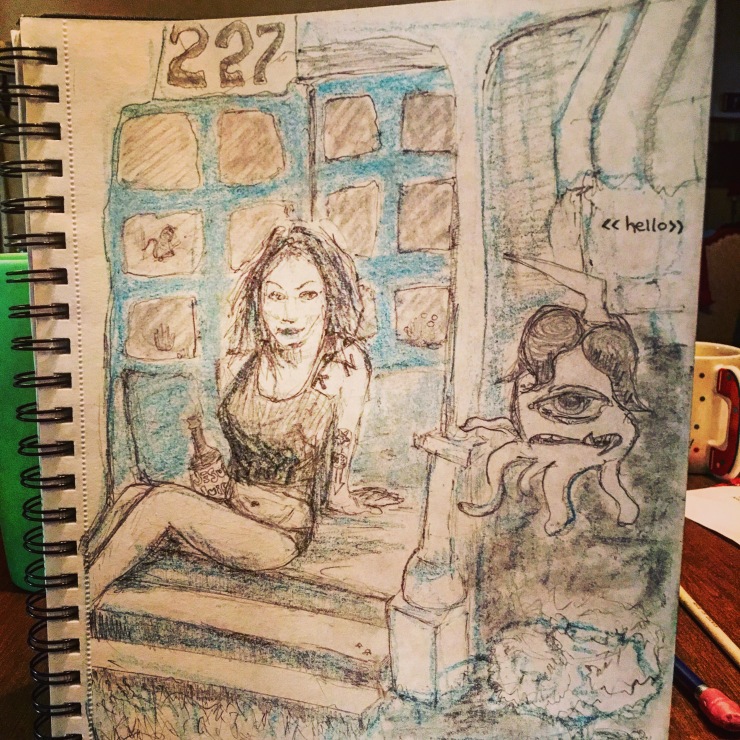 Virus of the Cows: <<what do you remember about the time before my children?>>

Finnegan of the Cooks:  Before your what?!  From when?  Speak english imaginary fiend!

Virus: <<AARRRRGGG!!!  just roll with me kid.  you sure can screw up a good narrative junior.>>

Finnegan:  Hey.  Don’t call me that, you ass head.  you…you truck drivin’ disease!!  I thought you were a pleasant voice inside my head back in the hospital…

Finnegan the cook:  Friend?  I think I’ll stick with fiend.  What kind of a deal you devil?

Virus:  <<why thank you!  i just mean…how about you never call me a disease?  i am nothing so base.  nothing so wrong or destructive.  i am a virus.  something that grows, not destroys.  i am like a computer program, or language; written by  God, Herself.  i am a builder. i am a giver!  a lover of life.  it tastes good, life.  kind of like chicken.  i rebuild the broken.  i bring back the lost and fallen lambs…errrr…rather cows, humans, and chickens (it is fun to watch them run around headless for eternity), but never dogs or cats or mice (they already over run the earth without the shot at immortality)  oh, and pigeons.  i like to reanimate pigeons.  i think that about covers it.>>

Finnegan:  Pigeons?!  Zombie pigeons?  That’s a thing in this story?

Finnegan:  Gosh, you are a specifically benevolent and generous being aren’t you?

Finnegan:  Ok, I get it.  And in return for me caring about your disembodied…err…multi-bodied feelings?  I get…?

Virus the Liar:  <<i will never call you junior again.  i will not even let anyone else in the story do it.>>

Finnegan the Gullible:  For Reals?!  You promise?

Virus:  <<ofcourse.  unless it is that asshole boss of yours.  it is kind of a running joke and plot point.>>

Virus:  <<good.  now let us start over.  what do you remember after your drunk ass wrecked your van?>>

Finnegan:  Gawd, you are an ass.

Finnegan:  Oh yeah?  Not even the blood of the innocent?

I am curled up on the couch in a spiderman blanket, clutching Baby Thor’s stuffed panda.  Last night I broke out of the hospital and wandered the streets of Normal Towne.  I wandered for hours until I remembered where I lived.  I was way messed up and withdrawing from all the drugs the nurses had used to sedate me and block the pain caused by my wreck.  I tried to steal some clothes from a couple homeless guys sleeping near the train tracks.  They woke up went I started going through their stuff.  But they didn’t mind so much because they had some extra clothes and I let them watch as I stripped away my hospital gown.  One of them, a guy wearing a sweatshirt with the ‘Merican’ Flag on it, gave me a swig of his Jesus Juice before I stumbled off barefoot into the night.  It was raining slightly, which helped me wash some of the grease from my hair and my face, and some of the blood from the tubes and bandages that I pulled off.  I smelled horrible, but was relatively clean by the time I passed the Bucket o’ Blood.  It was then that I realized that I felt really strong.  Like drunk strength times ten.

All the restaurant’s windows were dark except for the neon bar signs.  I heard a noise from the dumpster out back and ran away from the restaurant; fearing that it might be a co-worker.  I didn’t realize that it was the middle of the night and that it was probably just another bum looking for a bottle or a bite to eat.  I made a mental note to go repay the kindness those bums who clothed and gave me a drink showed to me.  I think something like that would only have happened in Normal Towne.  People are really kind here, sometimes.

I lurked through the alleyways behind the Bucket o’ Blood.  There was a streetlamp overhead and beer bottles alongside soggy cardboard boxes from the surrounding restaurants and bars strewn across the ground.  This was the business district next to the Ticky Tacky University Campus.  I realized that it was that rare part of the night when the alleyways are deserted.  A few hours earlier or later and there would be service industry workers of some sort closing or opening the various shops, bars and eateries.  Soon there would be trucks bringing supplies and products that these workers would prepare to sell to the consumers who would come and spend their money.  The people always come and spend money.  Everyday.  It is our religion.

Anyway, I was out of my mind and roaming the streets when I happened by the Belly Bar.  “Home of the Dead Cup that will fill yer belly up”.  With beer of course.  I could not for the life of me think of where I had wanted to go when I left the hospital, but I did remember that there was a fire escape with roof access in the alleyway behind the Belly.  So in a couple of minutes I found myself climbing a wet ladder to the top of the most popular music venue in Normal Towne, bare foot.  As I stood atop the building and stared at the sleeping community I felt alone and empty.  I knew something, someone was missing.  I listened to the sound of car tires rolling through standing water on the rain slick streets.  I wondered where the people in these cars were going.  I thought that they should be at home at this hour.  And then I realized that was where I wanted to be when I was tied to the bed at Normal Towne Regional Hospital.  So down the ladder, off the roof, through the streets and home I ventured.  When I found myself standing at the front door of my home I realized that the pockets of the clothes I was wearing did not come with a copy of my house key.  Otherwise those bums wouldn’t have been homeless.

So I had to break into my own house.  I tried all the windows and doors first, but everything was locked up tight.  I decided that I would kick in the back door if I could.  I was cold and wet and done with the day.  When I raised my foot to the back door, I put all of my strength into the kick.  I figured that someone my size would have a harder time kicking in a door than, say…a cop you see doing it on television; but to my surprise the door flew back and came off of it’s hinges as it crashed to the kitchen floor.  My foot, my leg did that?  It was a loud and messy way to come home and I’m sure my neighbors were super glad to know that I was back.

Finnegan of the Cooks:  What do you mean?

(You feel yourself fading away) 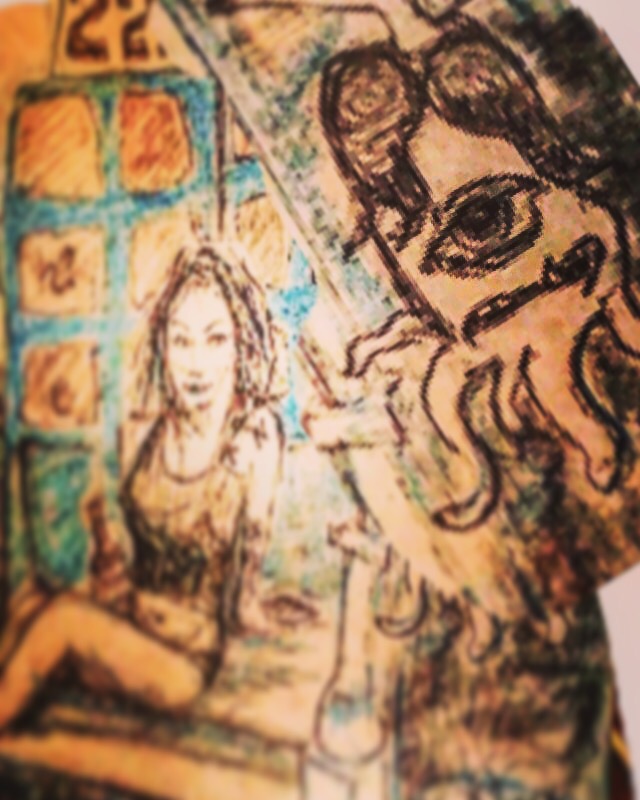 But it is MY Stor…

<<so, Finnegan, you broke into your house cried about your kid being gone, got cleaned up and drunk and masterbated or something like that and passed out in a superhero blanket.  you wake up to Hopskotch Sundey and the Police knocking on the front door of your house.  you stumble to the door wearing only panties and that sweatshirt you bummed off those bums last night.  Did not that sweatshirt have a kitty cat sitting under a christmas tree printed on it?>>

<<anyway, when you busted out of the hospital in the middle of the night, the police were called out to find you.  your dishwashing buddy, Hopskotch Sundey, read a belligerent email you sent him in the middle of last night/this morning’s drinking jag about your husband taking your child and leaving you… and so Hopskotch and a couple of police officers wind up meeting on your doorstep at seven in the morning.  Naturally, since Hopskotch is a six foot tall black man with dreadlocks down past his shoulders standing at the front door of a missing white lady’s house, they assume he’s completely innocent…>>

I see what you did there.  Ha!

<<fearing for his life, Hopskotch Sunday tries to quickly explain that he is your friend, coworker and fellow artist and here after receiving a desperate email form you.  the two Normal Towne stare blankly through his words, hearing only a preamble to a murder confession.  they then inform Hopskotch that you were admitted into the hospital yesterday evening with near fatal injuries and were now in fact missing from the hospital.  the two officers explain the impossibility of you getting up and walking out of the hospital in your condition and their current theory of your abduction by a six foot tall black man claiming to be your “friend”.  as the two police officers are reading Hopskotch Sunday his rights and putting on the handcuffs, bam!!  Finnegan, that is when your half naked human female ass-hanging-out self opens the door and asks…>>

Can I help you officers?

<<can i help you officers, you say.  Hopskotch Sunday in handcuffs, turns his head to look at you over his shoulder and says:>> 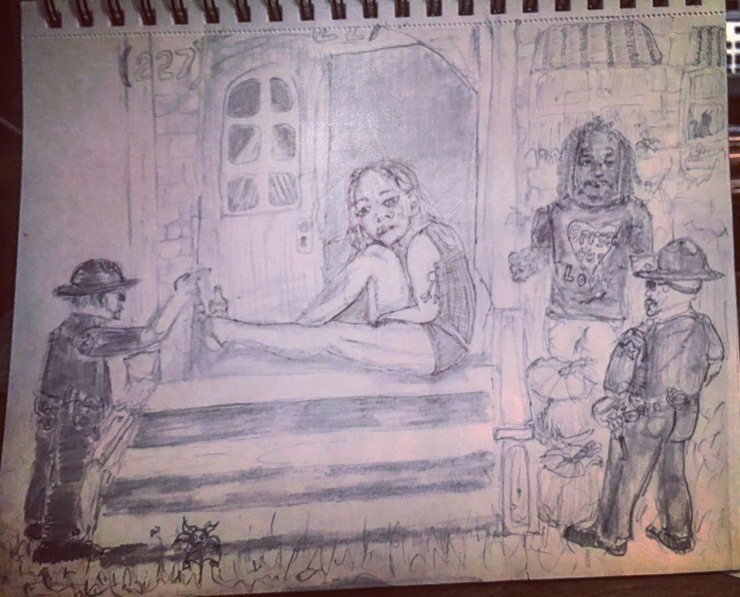 <<Hopskotch and the two police officers are all stunned to see you scantily clad and apparently uninjured.  I remember you replied to Hopskotch with a polite “Fuck You” and then start ranting to the police about how your husband ran off with your son and that they needed to: “Uncuff your asshole best friend and go find the other asshole who has run off with my child!!”  the two officers suddenly remember that they have something better to do than stay here and listen to your Crazy.  they then uncuff Hopskotch Sunday and push him toward you door.  the first officer explains that they have to go investigate a violent food poisoning at a local breakfast diner.  as they are walking away to their car, the second officer advises you to:  “Go fill out a missing persons report, and put some pants on ma’am.”  And like that the law is gone.  you and Hopskotch go inside and smoke some dope for breakfast and have a cup of green tea with goji berry.  Hopskotch asks you about the art show the night before and:  “What the hell happened after?”  Finnegan, you tell him that you cannot remember much of the art show.  all you remember is finding that note from Ruben and then hulk smashing walls and drinking fuck you amounts of whiskey and wrecking your van and Ruben and needles…and then you remember me.  nut you keep me to yourself.>>

Yeah.  Where did you come in the picture bud?

<<Ruben obviously loved you for your mind>>

View all posts by thefatherphil